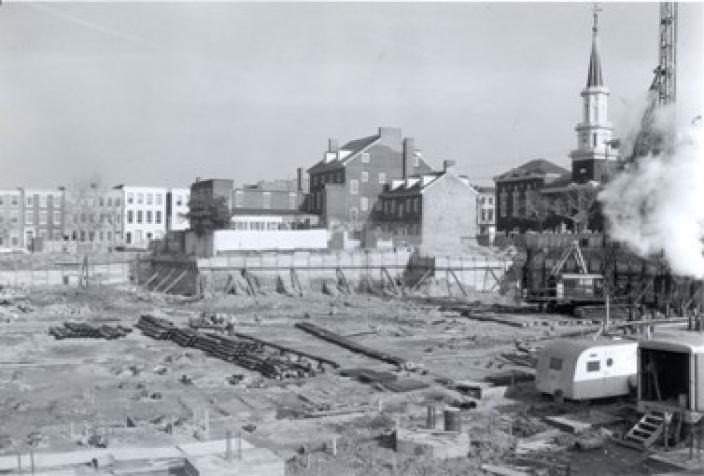 Half a century ago, entire blocks of King Street were demolished and replaced with modern buildings. What’s the legacy of urban renewal, and how does it influence today’s approach to preserving history and developing the city?

Perhaps you were in Alexandria in the early 70s when decisions were made and historic properties were removed on and around Market Square. Maybe you didn’t know about the urban renewal of that time.

At this program you will hear from some of the movers and shakers at this pivotal time in the City:
Bob Montague: A native of Washington, D.C., Bob Montague was born into a family steeped in Alexandria history. His aunt is Gay Montague Moore, author of “Seaport in Virginia.” A 1952 graduate of Episcopal High School, Montague has a bachelor of arts in history from the University of Virginia. He served in the Navy before becoming an assistant attorney general in Kentucky. He moved to Alexandria in 1964 and became the lawyer for the Historic Alexandria Foundation. In the late 1960s, he helped challenge Alexandria’s urban renewal program in the Circuit Court. The case, brought by the Historic Alexandria Foundation, argued that Alexandria was not blighted enough to meet the standard for urban renewal.

Tom Hulfish: A native of Alexandria, the Hulfish family goes back for at least six generations in the city. He attended George Washington High School before moving on to St. Paul’s School in Baltimore. A Navy veteran, Hulfish returned to an Alexandria that was in the midst of a heated discussion on urban renewal. His parents, who owned a hardware store that was demolished in the first wave of urban renewal, were solidly against the idea. As a young man Hulfish was for it — a position he says almost found himself disowned by the Hulfish family. These days, his view is more nuanced. As a longtime chairman of the Old Town Board of Architectural Review, Hulfish now believes urban renewal might not have been the best idea after all.

John Quinn: A native of Hartford, Conn. John Quinn came to Alexandria in 1961 to work for the city’s urban renewal program. From his office at Alexandria City Hall, he helped oversee four different urban renewal projects in Alexandria. In 1967, he moved over to the housing authority, where he served as assistant director for development. He left the city in 1973, and launched a career in development. He’s now a real-estate broker for McEnearney Associates, which he joined in 1985.